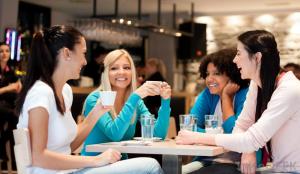 Use Case: A Train Wreck in the Making

Jenna was the center of attention on this particular morning as four young ladies sat around the table at a coffee shop discussing her recent engagement.

Amidst the excitement came a lot of discussion about important details yet to be worked out. Chief among them was the all important wedding dress decision. In fact, just mention of the dress took the discussion to a crescendo…Then it happened!

A well dressed gentleman sitting near these ladies, was obviously listening in to the discussion as he abruptly…and quite awkwardly interrupted them to say, “My shop just happens to sell wedding dresses.”

At that very moment, I could have sworn I heard car tires screeching to a halt, a needle scratching a record and a woman’s blood-curdling scream simultaneously, right before the deafening silence…

With frozen smiles and half-formed words, the four women sat, not knowing what to say next. That is until one of Jenna’s friends covered for her with a, “Good to know” response. In an instant, the mood had changed.

Their perception that they could have a conversation in public and expect…not privacy…but courtesy, had certainly been called into question. The moment was over. The conversation ended. The ladies disbanded.

I immediately thought, ‘This is what it feels like when some unknown person interrupts a forum conversation and inappropriately and prematurely tries to sell something.’

This well intended business owner was at the right place at the right time, but with the wrong approach. With his target buyers sitting right in front of him, he lost sight of the importance of an appropriate interaction and instead treated them like an inappropriate transaction.

This is what poorly executed social selling looks like when done in person. What gets lost in an online social setting, however is the unforgettable reactions on the faces of the  victims. For a visible reminder, one only needs to look at the face of Taylor Swift when she was Kanye’d.

Reckless social sellers are blind to that…and that’s a shame!

We’ve all been guilty of saying something in email that we’d typically not say in person. We are just as susceptible in our Social Media interactions.

It’s so easy to forego the courtesies and social etiquette when interacting on social media. This is especially true when it comes to social selling as I often hear social sellers shove the responsibility back onto the prospect saying in essence, “They shouldn’t have accepted my connection request or been talking in a public forum if they didn’t want me to sell to them.”

What are some of the DOs and DON’Ts that top your list?