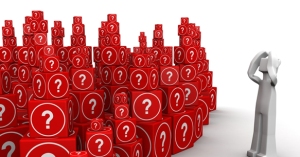 “Am I going crazy?” Having just answered the phone, I had no idea who was calling and asking such a question of me. I responded with a courteous, but cautious chuckle saying, “Well…I think I’ll need a little more to go on. With whom am I speaking?”

She paused, told me who it was, laughed rather distractedly, then proceeded to dive right into describing her dilemma from today’s meeting with the Marketing Director from her “problem division.” She is the Sales Director of a firm in which I knew a bit about, particularly with the company’s background and this particular division’s struggle.

In summary, sales were strong across all of her other divisions and lines, each of which had their own marketing leader, while she led the Sales across all divisions. Things were great, that is for all but this one division. Sales continued to decline year over year and had high lead dependency from Marketing, thus her concerns.

The Rest of Her Story…

The sales model is B2B with an outbound sales team that sells consumer products ranging from $200 – $1,000. As described earlier, they are highly dependent upon Marketing to deliver leads.

The Division Head and Marketing Director were both new to this division in 2011 and had stepped in with a new, radical, $1M cost-reduction strategy for marketing. The new marketing mantra became for the next two years, “Less Quantity, More Quality!”

This strategy resulted in lead reduction of 60% in 2011 compared to 2010. In 2012, the leads dropped another 40% from 2011. Not surprisingly, sales had correspondingly declined steeply, more so than any other recent period. While sales did have a dramatic decline, it was nowhere near the rate of decline for the lead volume.

The Sales leader saw neither quantity nor quality from marketing, and as she describes it, the numbers supported her version of the story. Despite the numbers, the Marketing Leader and Division Head remained committed to defending their original strategy a year and a half into it with major revenue losses, and subsequently showed no openness to a different, or better strategy.

Towards the end of 2012, she managed to get a commitment from Marketing for substantially more qualified leads in 2013, although to the Marketer, ‘qualified’ apparently meant email, number and “Request for literature.”

Additionally, the Marketer’s commitment was simply to an aggregate number of leads on a monthly basis, but not by geography, firmographic, demographic, product type or other. His tactic? Email marketing….it’s part of the ‘cost-reduction’ plan.

Today, prior to the call and after her meeting with the marketing team, she made her plea for more qualified leads as the current lead quantity left her outbound team with capacity in excess of 60% going into their largest quarter of the year.

After her meeting, she shared that in addition to the quantity of leads being a third of what they needed, 80% of them were for two of  their 10 product lines. This meant that they had on average  a half-lead per rep to call on each day for the remaining products….not enough to meet the sales plan.

Through frustration, the Marketer responded to her plea for more balanced and qualified leads with saying, “A lead is a lead is a lead. We know that regardless of what product type we market, more than half of the prospects will want something different anyway. We could collect leads on just one of our products and it wouldn’t matter. All that matters is that you have leads of any type, then your team can determine what they really need.”

Again, the sales exec says to me…this time through tears…“Am I going crazy? Do I have my expectations set too high? Is it unreasonable to ask marketing to know the customer well enough to hit who they’re aiming at? Maybe I am the problem. I don’t feel like I am but it just seems like we need to change our approach to marketing.”

I responded, “Being crazy and unreasonable is not your problem, although your 2-year tolerance may be a part of the problem. It sounds to me like there is a much larger issue at play here…”

I speak with people in Sales and Marketing roles from all over the country. From executives to analysts to reps. Lead generation and qualification is by far, one of the most common frustrations I hear.

No matter who I am working with or from what field, I am pretty quick to keep the responsibility and accountability with each respective group I am working with. Most companies needing my help typically don’t have their respective ‘houses in order.’ Therefore, I keep Sales concentrated on their own responsibilities and Marketing, theirs so I don’t create an all out Game of Thrones. I work with the executive leadership on cross-departmental improvements before circling back to the departments.

For these reasons, offering up an anecdotal recommendation to this Sales executive to “change the Marketer” after merely an hour-long conversation would be ill-advised, no matter how apropos that may seem. There is always more to the story, especially when it comes to Sales and Marketing alignment.

What Advise Would You Give?

Given the very limited facts we all have here, what advice would you give and to whom would you target your comments? The Marketing Director? The Sales Director? The Division Head? Who would you love to spend 15 minutes with and what would you tell them?

With more than 200 million members now on LinkedIn, millions are wasting opportunities to be noticed…liked…shared by others, by ignoring one simple practice.

What is the Practice?
The practice, is simply doing what newspapers have known and done for years. Newspapers begin with the headline, followed by a compelling opening sentence/paragraph, with further details provided later in the story for those interested.

What is the Problem?
The problem lies in the preamble setting up what your post or update is aiming to teach. Consider this post for example. I could have opened like countless people do, which in this case would be to emphasize who LinkedIn is, what they are known for or have now become (i.e., “LinkedIn has become the largest B2B…). You know how it sounds.

If I did so, not only would that be redundant with what most already know [INSERT YAWN HERE], but worse, I would squander the opportunity to elicit reader’s interest for what they may learn by reading my post.

Target your Openers
Instead, I aimed my opening at a specific profile (i.e., Those that post updates on LinkedIn and comments in groups, but rarely get shares, responses or likes). By targeting specific people with a concise message, when my post gets placed in LinkedIn’s updates, potential readers are seeing at a glance, what I want them to see…wasting opportunities on LinkedIn, because they hadn’t thought of this way before.

This principle of targeting your opening sentence also holds true for comments in LinkedIn Groups.

For example, in a group, someone posts a provocative topic or question. You respond with your unique point of view or contribution. If you are not getting likes or responses to your contributions, the two likely scenarios are 1.) Your comment wasn’t as unique or as contributory as you thought, or 2.) Your opening comments offered no compelling reason to read further.

Remember, when you comment in a group, not only is an update posted to the homepage with your opening sentence [or two], but that same opener is put into a reduced digest that goes out to the group’s subscribers. LinkedIn is doing everything it can to get you noticed. Don’t fight them. They are aiming to help you.

“In a ‘warp speed’ world, content-consumers spend their clicks conservatively”

Don’t just take my word…
If you take a cursory glance at the ‘Home’ tab of your LinkedIn page and scan the updates, take note of your behavior when scanning the countless updates for items of interest. What grabs your attention? If typical trends prevail, it is likely the photo or headline, followed by the description of the post.

While it is true that a good headline alone can draw eyes to the story,  in a ‘warp speed’ world, content-consumers spend their clicks conservatively. Will they spend it on your post or somewhere else? Rest assured, they will spend it somewhere.

Applying I.P.R. filters to LinkedIn
Since the aim of this blog is to always look for behaviors that contribute to Intentional, Predictable and Repeatable  (I.P.R.) results, lets summarize as follows: