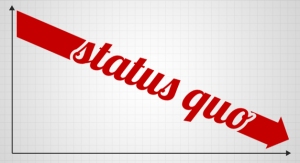 /ˈstātəs ˈkwō/ – Noun: The existing state of affairs, esp. regarding social or political issues: “they have a vested interest in maintaining the status quo”

“Status Quo” – The condition we all are describing these days. Whether talking about sales, marketing, innovation or strategy, our aim is always the same…to “disrupt the status quo.” But, this is commonly misunderstood.

While my aim for this post will center around salespeople disrupting the customer’s status quo, I believe you will find this relevant in all of its uses.

The Current Use and Understanding

Many of us in the Sales and Marketing community refer to ‘Status Quo’ quite frequently, and I would argue rightfully so. In fact, two of the foremost thought-leaders in this area, from my perspective, are Corporate Visions and CEB as their research and descriptions of the conditions and need for change are quite compelling.

When we talk and read about the status quo as our biggest competitor in the context of customers, we can misunderstand what is really meant. There is a tendency to infer that the customer has two choices – stay the same or change. I would like to reframe how we view status quo, and more importantly how we help prospects understand there is no such thing as staying the same.

To properly understand Status Quo, let’s reorient back to the original Latin definition – “An existing state of affairs.” What this is speaking of is a condition at a particular point in time. In other words, there are literally hundreds of thousands of things that took their course to lead a customer, prospect, business, etc. to the point where they are now…at this point in time. This all has led to an “existing state of affairs.”

Where this tends to be misunderstood, whether by the sales rep or the prospect, is to treat the status quo as a condition that will likely stay the same unless acted upon. This is a wrong understanding. In fact, the image I used above has it exactly right…Status Quo has a downward trajectory, but is most certainly not level.

Consider it from a financial reporting perspective. If you were looking at a P/L statement or Balance Sheet, you would have a snapshot of your business at ‘a particular point in time,’ which describes the existing state of affairs. While there could certainly be some predictive qualities inferred from either of those financial reports, it does not guarantee that doing things the same way will produce the same results.

On a side note, this is one of the  biggest problems I encounter when working with businesses whose growth has stagnated or declined. They tend to look back to more lucrative times and conditions and subsequently try to repeat what they had once done. This doesn’t work unless all of the other variables that were existent at the time years ago are exactly the same today. As you can imagine, this is rarely the case.

Don’t confuse what I am saying with companies that return to the fundamentals. Returning to fundamentals is often a good thing for organizations…provided their fundamentals were appropriate in the first place. I am referring more to organizations that try to recreate their past like the ‘no-longer popular’ college student that desperately tries to recreate his high-school glory days.

A Different Kind of Conversation with Prospects

With the perspective of financial reports not being a guarantee of future results, consider changing your perspective on what you are truly trying to “disrupt” when talking with prospects who are afraid to change.

Their perspective is most often one in which they believe what they are doing today is known and has some predictability that will lead to predictable results. Your conversations should help them understand that if they are not currently leading to improvements they were hoping and expecting to see, things will only get worse. You already know that if they are entertaining a conversation with you, that they are not seeing the results they had hoped for. Your proof points should be inserted at this point in your conversational choreography to bring the point home.

If you are struggling to disrupt the prospect’s status quo, it most likely due to your failure to help them see the consequences of not changing, and leaving the prospect with the impression that what they are doing today will still work going forward. Tim Riesterer, Chief Strategy and Marketing Officer at Corporate Visions, often shares the following comments based on CEB’s research conducted with 5,000 buyers and decision makers that speak with salespeople:

86% of buyers said that the rep’s message, what they communicated in a meeting or phone call, had NO commercial impact whatsoever to them. In essence, they came away with the belief that what they are currently doing right now, the Status Quo, is okay and they themselves are okay. How do they know? The Sales Reps led them to believe that was the case because there was nothing to suggest otherwise in their communication.

When you speak with prospects, does your communication suggest any reason for change?