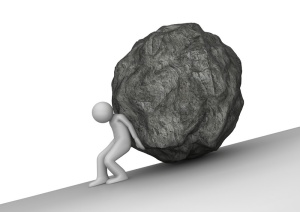 Recently, 2,500 Children’s Ministry Directors from around the country convened in Chicago to attend KidMin, a conference dedicated to their profession. I had the distinguished privilege of leading a workshop for an audience in which was far different from those I have traditionally worked with before.

Nevertheless, my objective was the same regardless of profession, topic, or other. My primary goal was to create dissatisfaction with the attendees’ status quo and compel a different way of thinking about and solving their issues.

This did not mean giving a compelling ‘speech’ or ‘presentation,’ but rather creating an impactful experience. This is often easier said than done.

It is easy to stand up front and tell people about the problems they are experiencing. At best, you will earn credibility, but that is not enough to compel people to change. The status quo can feel pretty comfortable to most people. Despite the gravity of a person’s problems, significant behavioral change rarely comes from the safety of a shared observation, but rather from their own experience. Experiencing the gravity of their problems is different from talking about the gravity of their problems.

Experiential vs. Presentation
In order to help these Directors better understand the gravity of what they were dealing with, and the impending consequences of not addressing the issues in a different way, I needed to create a constructive tension between their current status (Status Quo) and where they were aiming to be.

Therefore, I created an experience that would help the attendees ‘feel’ the impact of the problem rather than tell them about the impact. The experience was as follows.

Creating the Experience
When we went to our breakout session, I organized people into smaller groups giving each group five different sized boulders (larger than a softball, but smaller than a bowling ball).

The first part of the exercise was to discuss within their group the biggest issues they were all facing. They would then agree on the top 5 issues and use a marker to write their biggest problem on the biggest boulder, using a word that best described the issue they were facing. Then they would do the same with the 2nd through 5th issue on each respective boulder.

As we reconvened, I selected one volunteer to come to the front to serve as our representative Director. We loaded a backpack full of the five boulders, identifying each one as they went into the pack. Then I had her put the backpack on and describe the immediate impact. She shared that it was heavy, but she was okay for the moment. A term for what she was experiencing, coined by the Corporate Executive Board (CEB), would be Rational Drowning.

I went on to talk with her about how she dealt with each of these issues on a daily basis and the impact this had in shifting her focus from where she was aiming to take her ministry, compared to the urgent focus of trying to solve the problems (i.e., The boulders in her backpack). During our discussion, she shifted her weight and adjusted the pack due to the weight. Here I used the physical impact to lead to her Emotional Impact, another CEB term.

Standing on stage, she described [through tears] that she was incapable of solving those issues. They were too overwhelming for her to handle all at once. She also realized that these issues were lessening her effectiveness with her children in the ministry as well as supporting her volunteers. you could have heard a pin drop from the other attendees, because in large part, this was their story too.

The Moral of the Story
As you can imagine, there is a lot more to this story and what we unpacked in our sessions together at the convention. But the point of this article is merely to call out the importance of what we communicate and how.

As I mentioned at the beginning, I could have easily stood up front and ‘presented’ the scenario by talking about it. Heads would have nodded in agreement that the problems are real, and “Yes, I should do something about it,” but few would leave the convention changed, just inspired…or motivated. But we know where that leads.

Before I could talk with them about ‘Solutions,’ I had to effectively communicate in a way that would compel a change in their behaviors, away from the comfort of the status quo.

For those whose business requires communication with others (e.g., Sales, Marketing, Business, Ministry, etc.), consider creating experiences that draw people into the center of their own story.

In CEB’s Challenger model, this would be the process of leading them from Rational Drowning, where they recognize the story (with a sense of distance), into Emotional Impact in which they recognize it is their story. It is at this point where change begins to occur.

I would love to hear your stories of how you have created experiences to deepen the message you were communicating.